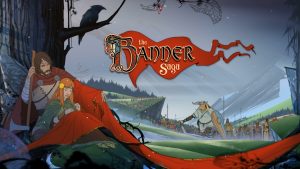 As many who’ve watched the Randomcast already know, my penchant for tactics and strategy games is well documented. No matter how much I enjoy a Souls game or a quality FPS, nothing beats tactically surveying a battlefield and planning out, one turn at a time, my enemy’s destruction. Best of all, these days there is no shortage of amazing tactics games. One of the best out there in the last few years is, undoubtedly, The Banner Saga.

Developed by Stoic and with music composed by the talented Mr. Austin Wintory, The Banner Saga is an epic tactics tale of a world on the brink of collapse due to the return of a large enemy force known only as ‘the Dredge’. In an attempt to hold back the night, the members of the races of humans and Varl, a giantesque clan of horned pseudo-vikings, must join together and travel under one banner in a last-ditch attempt to save their world…or something of the like.

Recently, the second entry in the projected trilogy of Saga games was released to critical and commercial praise. However, tonight on the Randomcast I will be returning to the first episode and prepare my mind for battle. Whether or not it goes as planned? Well, that’s anyone’s guess. But it should be a good time. And there’ll be ample opportunity for voice work, as the game does not have a lot of cutscenes or recorded dialog, which I’ve always thought was a bit of a disappointment, seeing as the rest of the game is dripping with excellent production value (i.e. music, artwork, animation).

On a slight schedule change, Tonight’s show will begin a half hour later at 8:30pm EST and will be broadcast live on our Twitch page. We look forward to seeing you there!

DarkSideRob, as he's commonly known, is an avid gamer who fully admits that he's not very good at them and is actually quite awful at finishing them. Despite this, he continues to play as many games as he can and is determined to have fun doing so for as long as humanly possible.
You might also like
randomcasttacticsNewsRandomcast

by DarkSideRob on January 12, 2017
If you saw two robots arguing the meaning of life, what would your reaction be? What if the smart person running the Twitch channel “See [...]

by DarkSideRob on May 21, 2016
Later today, I’ll be firing up the Randomcast jet engines one more time in order to play some more of the new hotness on everyone’s [...]

by DarkSideRob on April 29, 2016
We’re back from PAX and boy do we have a lot to share with all of you. We’ve got some fun games planned over the next few weeks, as [...]

by DarkSideRob on April 14, 2016
Dark Souls 3, the latest entry in From Software’s rage-inducing saga, is everything one would come to expect from these games. It’s [...]

by DarkSideRob on February 26, 2016
It’s Friday once again boys and girls. That means it’s Randomcast time. And this weekend we’ve got a special double-header [...]
Comments
Leave a reply