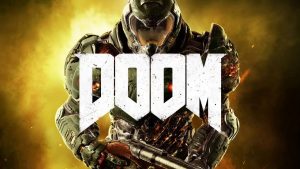 Later today, I’ll be firing up the Randomcast jet engines one more time in order to play some more of the new hotness on everyone’s PC or console right now: Doom. Yes. You read that correctly. Doom. No. You didn’t enter a time warp and end up back in 1993. It is 2016 and the hottest game out right now…is DOOM.

But wait. How did we get here? Wasn’t Doom supposed to be hot trash? Didn’t Bethesda actually do the thing we always blame publishers of doing when a game is “not good?” — Hold the game until release and not send a single outlet a review copy.

Pretty sure that’s exactly what they did.

And yet, everyone seems to be really enjoying the massacre-fest that is the new Doom. Not only that, both fans of original Doom as well as folks who’ve never played a Doom game seem to think the game is quite a blast!

So come join our merry lil stream later on this afternoon and I’ll give you some of my thoughts on the game as well as some running commentary on the crazy that is the Doom demonic invasion!

You can catch the Randomcast live on Twitch
and be sure to follow us on Twitter to know exactly when we go live!

DarkSideRob, as he's commonly known, is an avid gamer who fully admits that he's not very good at them and is actually quite awful at finishing them. Despite this, he continues to play as many games as he can and is determined to have fun doing so for as long as humanly possible.
You might also like
randomcasttwitchNewsRandomcast

by DarkSideRob on January 12, 2017
If you saw two robots arguing the meaning of life, what would your reaction be? What if the smart person running the Twitch channel “See [...]

by DarkSideRob on May 20, 2016
As many who’ve watched the Randomcast already know, my penchant for tactics and strategy games is well documented. No matter how much I [...]

by DarkSideRob on April 29, 2016
We’re back from PAX and boy do we have a lot to share with all of you. We’ve got some fun games planned over the next few weeks, as [...]

by DarkSideRob on April 14, 2016
Dark Souls 3, the latest entry in From Software’s rage-inducing saga, is everything one would come to expect from these games. It’s [...]

by DarkSideRob on February 26, 2016
It’s Friday once again boys and girls. That means it’s Randomcast time. And this weekend we’ve got a special double-header [...]
Comments
Leave a reply